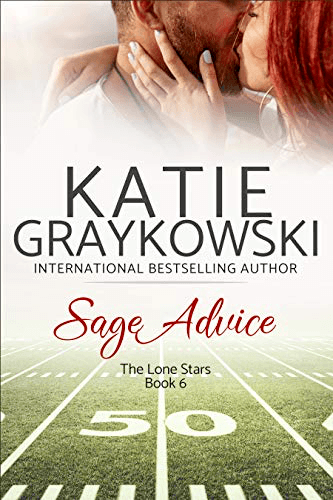 Chloe Caldwell has it all. She’s a psychologist with a practice she loves, an award-winning relationship blog and podcast, a brand-new book coming out, and a fake fiancé. The world is dying to meet the man who captured the relationship expert’s heart. And so is Chloe. She told a little white lie to avoid dating a coworker, and now she needs to find someone to pose as her fiancé.

Enter Pierce Rogan, tight end for the Lone Stars football team. He’s charming, talented, and has the world at his feet. As a favor to a friend, he agrees to a blind date with Chloe.

He picks Chloe up … and the earth doesn’t move and sparks don’t fly. Cupid seems to have taken the night off. They don’t hate each other, but they don’t exactly like each other either. As he’s taking her home early, Pierce accidentally runs over her foot, and they end up in the emergency room.

To help him save face, Chloe takes the blame for the accident. But she isn’t his normal supermodel type, so people assume she’s his sister.

Pierce has never had anyone take up for him. Damn if he doesn’t start to see Chloe in a new light—and it’s not as a sister.

She tells him about her fiancé issue, and he jumps in to help. Only, the entire world now thinks Chloe is his sister. He’s forced to set her up with his best friend and watch as his friend fawns over the woman he now has feelings for.

Can he convince Chloe that he wants to be more than just friends? Or will he have to watch the woman he loves fall in love with another man?

About the Author Katie Graykowski